Day 23: In which I talk about myself some more.

Hey guys! So this evening's agenda (Hanging out with my cat, gnawing on leftovers, and nursing a bad case of the monthly blues...thrilling, no?) calls for something comfy, cozy, and pretty. As threatened yesterday, I did wear the black top again, but this time as a layering piece, and I'm really happy with it. I think I was thrown off earlier by how austere it always looked on the hanger, all boxy and covered up, but really the silk is so fluid that it sort of floats over my curves and falls in a really flattering line. This top was quite a find. I wish I could show you the construction of it...it is exquisitely simple. Not one stitch is unnecessary. I LOVE stuff like that.

My hair is very sleek today, a rare occurance. I like it. It reminds me of my ultimate hair icon of all time (what, you don't have one of those? Psssh, get with the program!), Miss Parker, from The Pretender. Anyone remember that show? I still think she is one of the best female lead characters ever written for television. Such. A. Bitch. Goddess. I just loved her awesome 90s minimal femme-fatale style, her razor sharp hair, and her Morticia Addams-lite makeup. In homage, I decided to go a little arty with my own makeup. Which means I did my brows and put on blush and lip gloss. Ka-ching! One of these days I'm totally gonna bust out a Miss Parker outfit post. Maybe even in character. But today, cozy is the name of the game. 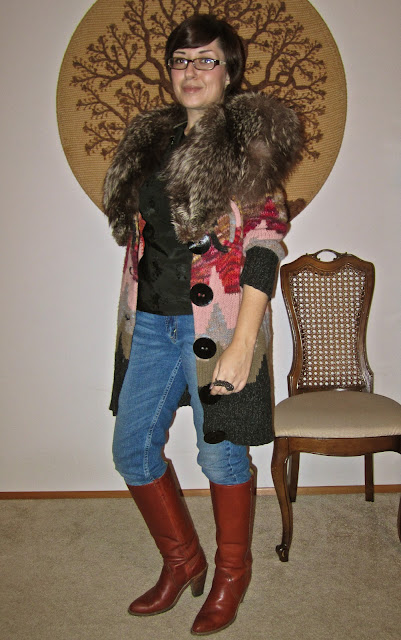 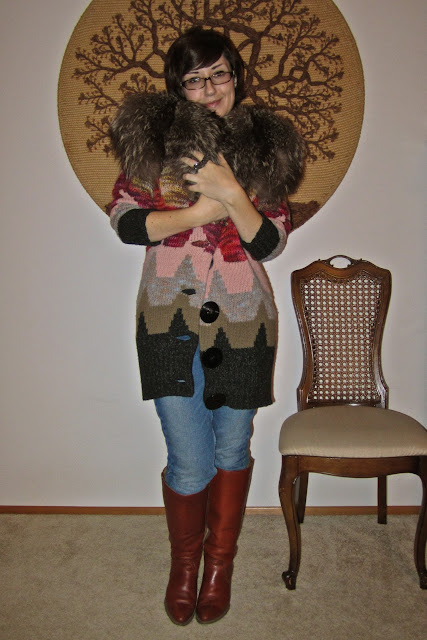 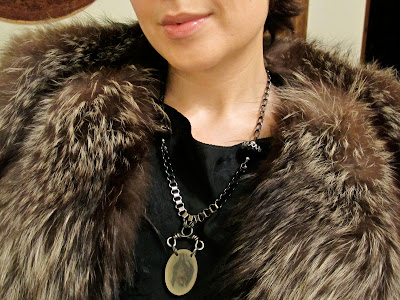 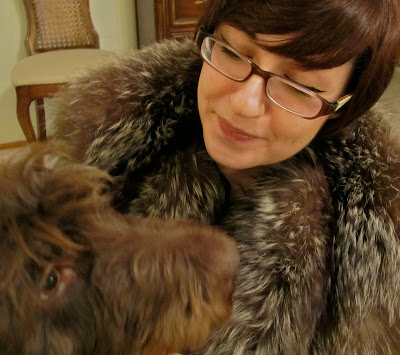 The interloper strikes again!
Katayone Adeli silk blouse, thrifted; Anthropologie sweater-coat; Vintage fur; Levis jeans, Marshalls; Vintage Frye boots, thrifted; Bat necklace, gift; Feather knuckle ring, F21.
And now for something infinitely more thrilling! I have always dorkily coveted one of those silly blogger awards, so when I found out the lovely Toni from La Vie Toni had tagged me for the Versatile Blogger Award, I nearly threw up from excitement. Toni not only injects adorable style into her 30 for 30 outfits, she also makes (and takes mouthwatering photos of) delicious foodie things, and writes a witty and relatable blog. Definitely check it out. Ok, so, here’s what I'm supposed to do:
1. Thank and link back to who gave you the award
2. Share 7 things about yourself
3. Pass it along to 7 other blogs you recently discovered and enjoy
4. Leave your recipients a note, telling them you awarded them the award
Ok. Seven things about me. Hmmm.
1. In college I majored in theater (mostly costume design, which I actually parlayed into a pretty sweet side gig for several years...) and minored in language study. I never finished a degree in either!
2. Before I ended up on my current career path, I worked in restaurants and bakeries for over a decade. When I was growing up, my parents had a little cafe, so the culinary arts were in my blood. I still love to bake, but ultimately I have found that when you try to turn something you love into a living, instead of just doing it because you love it, it gets lonely and discouraging. I'd rather just make a cake and eat it!
3. I started buying my own clothing and collecting vintage when I was twelve. It was always very important to me to dress the way I wanted to. I was still vulnerable to trends, but self expression was, and still is, my ultimate goal. Remember when the 70s were all the rage in the 90s? Well, I had the real deal. I wish I could say this made me the coolest kid in school, but really it just made me that weird dorky girl who wore old clothes that were too big for her.
4. When I first moved away from home and was totally broke, I sold off the vast majority of my vintage collection to the local theater companies I worked for, and was able to live off the proceeds for a year!
5.My favorite movie of all time in The Neverending Story. Don't even try to tell me that movie didn't blow your mind when you were a kid. Jurassic Park is a close second, followed even more closely by The Professional.  What, you were expecting a little more Jane Austen? Ok, ok, the British version of Persuasion is pretty good.
6. Ummmmm...Oooooh, ok, here we go. My dad and I went to a Star Trek convention when I was thirteen or fourteen. I think it was maybe my birthday present to him or something. William Shatner was the star attraction. He showed up two hours late, drunk off his *ahem* and high as a kite on painkillers (by his own admission!) and proceeded to launch into an epic profanity-laced diatribe on the pitfalls of a showbiz career, and how much it hurts to fall of a horse. I think he meant that last bit literally. It was one of the most memorably funny moments of my life. I was so happy when they tapped him for Boston Legal. The man just shines. Like a little light.
7. I have only ever lived in two places. I was born in Portland, and tend to think of it as home. We moved to Newberg [30 miles south] when I was 7, so that's really where I spent my formative years. I've spent the last seven years living in Portland, but recently moved back to Newberg for work. I actually like it a lot better this time around. But it still needs good sushi. Sometimes I wonder if I'll ever venture too far afield from Portland...oh,
I'll have plenty of adventures, but I think I'll always call Portland home. My family has been here for at least five generations. Plus,its just such a perfect city. Nowhere else I've ever been compares.
Seven great bloggers I've recently discovered...
Elle is witty and adorable, and has supermodel dogs.
Alessandra has the sleekest style, and such good hair.
Zoe is kind of a genius.
Fabienne just bubbles with charm.
Shannon reminds me daily that being a nerd is secretly cool.
Style Underdog gives me hope for a chic future.
Charmalade makes me think.
I've realized that all the bloggers I selected are bloggers who not only post cool, creative outfits, but also write cool, creative posts about whatever is on their mind, which to me is the essence of what makes them versatile bloggers.
In other news, I just finished watching this lovely video of Alexa Chung dishing on her favorite Brooklyn haunts. I was a little slow to get on the Alexa Chung bandwagon, mostly because she always looks so damn twee, and perfectly disheveled, and I always sort of assumed she was styled. But she's significantly less cute in this video than I was expecting. Do you know what I mean? She just seems like that sort of nice, unassuming, tomboyish girl you could hang out with. So, ok, I kind of get it now. Maybe she's ok. Maybe I want to be her best friend a little.
Posted by Rose at 12:05 AM